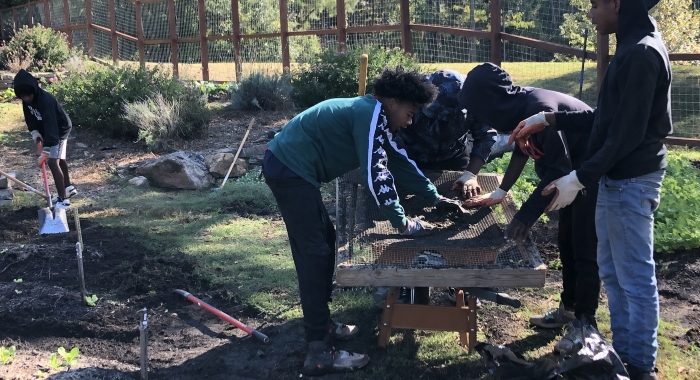 Youth working at the Seeds of Change Urban Farm, a quarter-acre farm in the West Boulevard Corridor where neighbors grow fresh, healthy food for the community – a response to the lack of grocery stores in their neighborhoods. Photo courtesy Rickey Hall

Mecklenburg County leaders are trying to find solutions for a worsening food crisis in the county’s poorest neighborhoods.

Nearly 15 percent of the county’s population lives in what the U.S. Department of Agriculture calls food deserts — low-income communities where most residents don’t have access to a full-service grocery store or supermarket carrying nutritious food. That figure exceeds the national average of 11 percent and North Carolina’s statewide average of 13 percent.

“Population density probably has a lot to do with” the higher number, said Mecklenburg County Public Health Director Gibbie Harris. “If you look at Mecklenburg County, it’s mostly city. In rural communities, people can have gardens. People need cars to get around. They can get to the grocery store.”

But that’s not reality for many living in the county’s low-income neighborhoods, where poverty, lack of transportation and race intersect with poor diets, health problems and gaps in resources. Despite spending $160 million last year to help feed needy families, the problem persists in Mecklenburg.

“When I hear stats (about food deserts), I know it’s true because I lived there,” said Ashanti Selassie, who manages an urban farm intended to fight food insecurity in east Charlotte. “I know what availability of food people have in the east, west, north and south of the city. I know what they don’t have access to.”

So does lifelong west Charlottean Brenda Campbell. When she was a little girl, she could walk to the grocery store to buy fresh fruit, meat and vegetables. Not anymore.

“Back in the day, we used to have a grocery store on this side of town,” said Campbell, 60. “Things change. The rooftops change. On the westside, there’s nothing but convenience stores or Dollar Generals. The food is limited; there’s no fresh meat, no fresh vegetables.”

That level of scarcity has drawn ire from county commissioners, who renewed talks about food deserts during the county’s January budget retreat. They mulled possible solutions, including whether offering economic incentives to grocery stores could sway them to set up shop in impoverished areas.

“The likelihood of enticing a grocery store (to a low-income neighborhood) is not very good,” he said. “The grocery store chains are concerned about their bottom (line).”

“It’s not a simple matter of there’s poor people, so stores don’t want to locate there,” said Peter Zeiler, the county’s economic development director. “There are access issues, population density issues and, unfortunately, income issues, as well. The lower the wealth density in a neighborhood, the harder it is for a food store to open up.”

Officials now are looking to bolster community partnerships to make up the difference. For years, the county’s worked with nonprofits, churches and companies to feed families in food deserts. Yet, all those efforts — and all those millions of dollars — haven’t dented the problem.

“No, it’s not enough,” Harris said. “We still have people who are hungry and are not getting the foods they need.”

The existence of food deserts in one of North Carolina’s wealthiest counties is nothing new. It continues to underscore the growing divide between the haves and the have-nots at the same time Charlotte’s grocery wars are intensifying.

That dichotomy was front and center during the budget retreat, prompting a series of impassioned speeches from commissioners frustrated with major grocery stores overlooking less-affluent communities.

“I look at those apartments (uptown) and they put major food outlets in those places, yet they can’t come to poor people’s neighborhoods,” said Commissioner Vilma Leake, who represents District 2, parts of which are considered a food desert.

“People can’t pay their property taxes. They’re being displaced. They can’t eat. It’s unacceptable,” said District 4 Commissioner Mark Jerrell. “The corporate community, those that profit from people in our community, have a responsibility to come to the table with us to discuss what their contribution will be to support people that are in the crescent.”

The “crescent” is a longstanding demographic pattern of Mecklenburg County’s higher-poverty neighborhoods to the west, east and north of uptown Charlotte. It’s also where officials say many can’t afford healthier foods.

“Whether it’s poverty, issues with chronic diseases, with HIV, with housing, if you look at the maps where these issues are highest in our community, they all look the same,” said Harris, the public health director.

County data shows that 64 percent of adults in Mecklenburg are either overweight or obese, the highest concentration of whom live in the low-income communities just outside of uptown. Those same neighborhoods tend to have higher rates of poverty, low education attainment, chronic disease and death. Officials say the lack of nutritious food in these communities is one of the leading drivers of those negative outcomes.

“In many ways, it links back to those socioeconomic factors that prevent people from being successful,” Harris said.