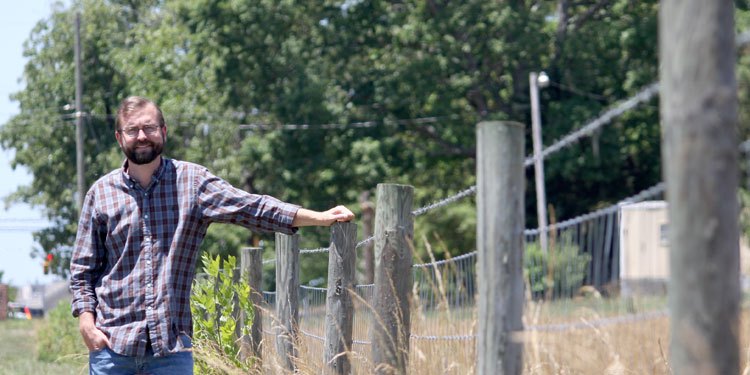 By Dave Yochum. A 35-year-old Cornelius resident has established the Carolina Farm Trust to preserve not just farmland, but the agrarian way of life in North Carolina.

“We want to find farmers and match them up with land,” says Zack Wyatt, who lives with his wife  Abby and five children on Oakhurst Boulevard.

The brand-new Carolina Farm Trust aims to protect farmland, foster an ecosystem of sustainable farming and support the farm to table movement. Indeed, farmland is disappearing at the rate of 100,000 acres a year in North Carolina.

“We want to compete with developers for land, buy it, and lease it back to the farming community, to cover the taxes,” Wyatt says.

The fundraising goal for Carolina Farm Trust in the upcoming year is $300,000.

Wyatt is launching CFT with a bang. He plans to hold the Carolina Jubilee music and food festival Oct. 16-17 at Van Hoy Farms in Harmony, about 45 minutes north of here on I-77. There’s already a Facebook page, Carolina Jubilee.

Wyatt says the Jubilee will provide a venue for Carolina microbreweries, wineries, and farm related vendors to showcase their products and educate the community.

Another goal is to create a community of followers who will support and engage in the Jubilee. In turn, they will support the types of growers and farmers who farm the land—and sell healthier, fresher goods at farmers markets like the one in Davidson.

Wyatt hopes the trust can acquire small parcels of land here and there—they could become community gardens, for example—and larger parcels that could become incubator farms, or continue to be real working farms. In many cases farms are owned by a generation of older people whose children and grandchildren have no interest in farming. At the same time, open land is prized by developers who scrape it and plant houses by the hundreds.

Wyatt says a common-sense approach to development would suggest first going back into “those areas that need to be redeveloped before we go in and destroy” fertile farmland. “I don’t want to come off as anti-development, but it is smart development.”

“There is no right or wrong, we just want to…raise money to compete dollar for dollar for land. Everyone has the right to sell their land. We want to be in a position to buy it and get it into a protective trust,” Wyatt says.

He hopes to buy a 40-acre farm in Lincolnton that is threatened by development. The cost: On the order of $250,000.

Acquisitions by CFT will allow new entrepreneur farmers to have access to land to get started. Existing farms can build on their success and expand.

Wyatt grew up in a 280-acre farm in Loudoun County, Va., just west of the close-in Northern Virginia suburbs. They lived in an old house, and Wyatt grew up eat venison, and the family bartered pork and beef. Much of Loudoun County’s agrarian past has been plowed under.

He went to Coastal Carolina University, graduating in 2003 and worked in technology and government contracting. He launched BizQueue, an Oracle software training company and still does contract work in technology fields.

“The value gets so high, and the developers get into local government and they change the zoning. Then, when someone walks to your door and can make you a multi-millionaire by writing a check, how can you say no to that,” Wyatt says.